Many thanks to KD Sarge for donating an ebook copy of her freshly released scifi m/m romance, Even the Score (Knight Errant #3), for a lucky commenter to win! 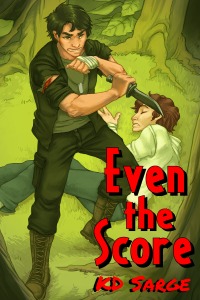 A novel of the Dream’verse

When Taro Hibiki leads a survival class into the backwoods, he has two goals: to prove himself as an instructor, and to propose to his beloved Rafe before he loses his nerve completely. In the wilds might seem a strange place for that, but it’s where Taro feels most at home – and the only place the couple can escape all their other responsibilities.

On BFR, proud colonists say the name stands for “Big Effing Rock,” and brag about their planet’s dangers. More treacherous than bomb bugs or sight scamps, though, is a human seeking vengeance. Soon Taro’s students are dropping one by one, and no matter what Taro does, the killer stays a step ahead. Worst of all, Taro comes to suspect that the students are targets of opportunity – that the ultimate goal is Rafe.

Taro would die for Rafe in a heartbeat, but who’s going to take care of Rafe if he does?

As it happens, the killer has a plan for that, too.

KD Sarge writes for joy and hope, and works for a living. She has tried her hand at many endeavors, including Governess of the Children, Grand Director of the Drive-Through, and Dispatcher of the Tow Trucks. Currently KD loves her job at a private school for children with autism.

Past accomplishments include surviving eight one-year-olds for eight hours alone (she lasted about ten months), driving a twenty-foot truck from Ohio to Arizona by way of Oklahoma, and making a six-pack of tacos in twenty-three seconds.

Writing achievements include the Weightiest First Draft Ever, as well as eleven other, much lighter, completed novels. She has somewhere between five and ten universes under construction at any given time, writes science fiction, fantasy, steampunk, smut (in many genres), and means to one day undertake a cosy mystery. A widow, KD lives in Arizona with her biological daughter, her internet daughter, two cats, and a hermit crab named Bob.

I have no idea how he can breathe when he sleeps on his face like that.