Congrats to tea58, who won Baited by Tami Veldura! Tami will release Baited on November 28. 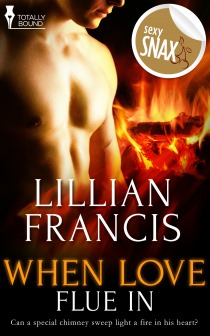 A soot-haired chimney sweep, an exploding flue and an uncooked turkey. It’s an unholy trinity that may make all of Dominic’s Christmas wishes come true.

Dominic is celebrating his first Christmas since his divorce, and although he’s spending it on his own, he’s determined to have a traditional Christmas morning, including a roaring fire. Unfortunately, Dominic’s chimney is blocked, which is why Reagan, a soot-haired chimney sweep, is head and shoulders up Dominic’s flue. Dominic is just lucky the man had a cancellation on Christmas Eve.

Unable to take his eyes off Reagan’s low-slung jeans and enticing ass while he sets about the hearth with rods and brushes, Dominic knows five years is a long time to be obsessed with the man who sweeps his chimney every Christmas. This year there’s nothing to stop Dominic from acting on his desires – except his own insecurities.

An exploding flue provides the opportunity for more than just polite conversation and could be the catalyst for a perfect Christmas. But Dominic will need to stop hiding who he really is before a special sweep can light a fire in his heart.

An avid reader, Lillian Francis was always determined she wanted to write, but a â€˜properâ€™ job and raising a family distracted her for over a decade. Over the years and thanks to the charms of the Internet, Lillian realized sheâ€™d been writing at least one of her characters in the wrong gender. Ever since, sheâ€™s been happily letting her â€˜boysâ€™ run her writing life.

Lillian now divides her time between family, a job and the numerous men in her head all clamouring for â€˜theirâ€™ story to be told.

Lillian lives in an imposing castle on a wind-swept desolate moor or in an elaborate â€˜shackâ€™ on the edge of a beach somewhere depending on her mood, with the heroes of her stories either chained up in the dungeon or wandering the shack serving drinks in nothing but skimpy barista aprons.