Many thanks to Clare London for donating an ebook copy of her freshly re-released m/m romance, Dear Alex (2nd ed), for a lucky commenter to win! 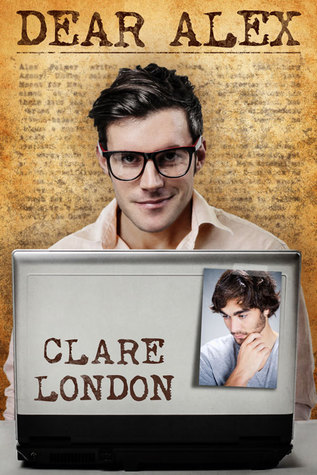 Alex Palmer writes the Agony Uncle column for Meant for Men – a magazine aimed at gay men, for their life and issues. What started as a genuine and ground-breaking feature has become a snark fest, due to Alex’s boredom and personal cynicism. His respect for the correspondents has dwindled away in direct relation to his own self-respect as a journalist. He no longer believes in his readers’ search for a soulmate, or in the column’s headline: “Is He Really the One?”

In the early days, Robbie Cooke was Alex’s co-presenter of the column. They’d been lovers, too. But that’s now all in the past. Unlike Alex, Robbie still sees the anguish and need behind the letters received by the magazine. He wants to help the writers, rather than turn their situations into journalistic entertainment. He and Alex may still work as partners on the magazine, but their fundamental disagreement on style means they’re no longer partners off.

A life of excess and casual lovers is wearing Alex out, yet he’s in denial. He’s determined he doesn’t need Dear Alex to set him straight about what’s wrong with his life. But gradually he comes to realise what he’s really missing: Robbie’s sense and compassion, and his love back in Alex’s life. The problem is, by the time Alex is desperate to make amends, Robbie may have already moved on.

This story was originally published as “Dear Alex” in the Dreamspinner Press anthology Make Me a Match.

“…zzzzzzzzzzzzzzz…” -Chaos & Mayhem, being a lovely warm catghan on my legs