Welcome to this stop on Edmond Manning’s King John Book Release Party Blog Tour! (Please note that you have to follow the Rafflecopter link below to enter this contest. Comments on this post, while much appreciated, will not count as entries. Thanks!) 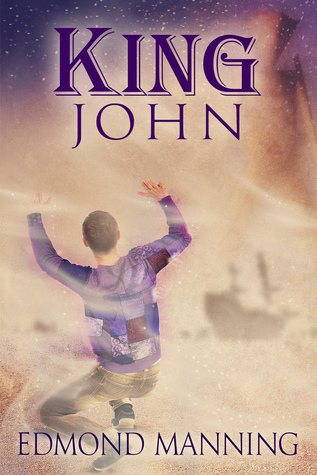 English attorney Alistair Robertson can’t quite believe an astonishing tale of kingship and transformation he hears at Burning Man, the annual counter-culture art festival in the Black Rock desert. Who are the Found Kings? Is “being kinged” as magical as it sounds?

Determined to find the mysterious garage mechanic named Vin who helps men “remember who they were always meant to be,” Alistair catches his quarry amid the extravagant sculptures, fire worshipers, mutant cars, and lavish costumes. After searching for three years, he’ll finally get to ask the question burning inside him: “Will you king me?”

Wandering together through the desert, Vin Vanbly and Alistair explore Burning Man’s gifting culture and exotic traditions, where they meet the best and worst of their fellow burners. Alistair’s overconfidence in Vin’s manipulative power collides with Vin’s obsessive need to save a sixteen-year-old runaway from a nightmarish fate, and the two men spiral into uncontrollable, explosive directions.

In this fourth adventure of The Lost and Founds, beneath the sweltering summer sun and the six billion midnight stars, one truth emerges, searing itself on their hearts: in the desert, everything burns.

Other stops on the tour:

Edmond Manning has always been fascinated by fiction: how ordinary words could be sculpted into heartfelt emotions, how heartfelt emotions could leave an imprint inside you stronger than the real world. He is the author of King Perry, King Mai, The Butterfly King, Filthy Acquisitions, and contributor to the bear anthology, A Taste of Honey.

In addition to fiction, Edmond enjoys writing nonfiction. You can pick up a copy of his Indie-publishing-finalist-award winning book, I Probably Shouldnâ€™t Have Done That. Feel free to contact him at remembertheking@comcast.net or on Facebook under his name, Edmond Manning.