Beyond the active WIPs (works in progress) that I’ve already mentioned (Koigu Falling Leaves socks, blue and tan baby pullover, sock yarn baby sweater), I have a few others hanging around the house… I’m not exactly sure how many, just that they’re around somewhere (probably with the exact needles I need right now) and I have a vague sense of guilt that they’re not done. So I decided to start tracking them down.

We begin with a tote bag I never use because it’s stuffed full of WIPs that I’d rather not think about.

Below is a poorly conceived tank top. I actually like the swirling (from not alternating skeins of variegated yarn – let that be a lesson to you), but it ended up too short. I picked up around the bottom and added a spiral lace border. All I need to do is crochet around the neck and armholes, but… I don’t want to finish it because I don’t want to wear it. I’ve decided it looks silly with the lace border at the bottom. And I think I’d rather have this heavy cotton yarn (Brushstrokes cotton) as a cardigan than as a tank anyway. So really, I should just rip it out and be done with it, right? Oh well. Back in the bag it went.

Obviously, a petal washcloth. Completed, except for weaving in the ends. However, this was to be the first of four petal washcloths for my family for last Christmas. Not quite so finished looking when you consider it as part of a set of four, is it?

As I was dragging WIPs out to photograph them, I realized several things. The first is that I have a lot of projects in black. No surprise, as I wear a lot of black. Why knit hot pink when I won’t wear it?

The second is that black projects do not photograph well with my crappy digital camera. Hmm, would I wear hot pink, taking its photographic qualities into consideration? Nope, probably not.

The third is that my black cat, chosen over the white kitten because I wear a lot of black, doesn’t photograph well either. I suppose I could take him back to my brother’s house and switch him out for his snowy white brother, Diablo, but my brother has vowed that my evil cat shall never again enter his house.

The fourth is that Chaos is, well, not exactly evil, but definitely very, very busy and sometimes naughty. Knitting projects being photographed have a magnetic effect on him.

But I digress… The picture below is Door County Cable in black Cotton Fleece. The body was knit in the round up to the armpits. When I started to go back and forth, I got really confused and put the project away in a snit. Two years later, I might not find the directions as confusing… or I might still. Best not to find out.

This is a pair of black Fortissima socks for my dad, promised for his birthday two years ago… or was that three? The problem here is obvious, there being only one sock…

Here’s a mobius cat bed for Chaos. Since it still has a hole in the bottom (and is definitely not felted yet), he found the row counter much more interesting. I put this project aside one hot and humid day this summer – it filled my entire lap with its way too warm self, and lured Chaos in for a nap. Sounds perfect, now that it’s cold out! But… I had forgotten that this project existed. Whoops. As soon as I get some of this baby knitting done, I’ll be back to this (if I remember I put it back in the WIP bag, that is).

If you’re wondering why the cat bed isn’t black, it’s because I was planning ahead… this time. I’ve already knit Chaos a black felted cat bed, and as you can see below (Chaos at six months), it’s quite difficult to get a good picture of a black cat in a felted black cat bed. Check out the claw action from the happy paws. He loved his felted cat bed, and still tries to squoosh into it sometimes. If he’s ever successful, he’ll have to be surgically removed. Hence the need for the giant mobius cat bed, so this one can be passed on to someone with a smaller cat.

I might have mentioned that there seem to be many babies in the works these days. First up is my coworker Maranda’s baby, due near the end of December, who will be receiving a lovely cat-haired covered tan and blue pullover and matching hat, which should fit her baby next fall.

Next up is the baby of my boss’s boss. I’m working on my version of the Knitpicks Last-Minute Stripes Pullover in Crayon.

Although I started this first because it seemed more fun, this project is on hold while I finish the sweater for Maranda’s baby. This baby isn’t due until February, while Maranda’s baby could show up at any time.

There are two babies more due in the February – March timeframe that I’ll probably just make hats for. I’m awfully tempted by this hat from Knitty Gritty, which would be the height of Minnesota winter baby chic. If I get crunched for time, they’ll probably get fruit hats.

My quest started with the Mexicali Baby Ole from Knitters (Summer 2003, Issue #71). It was a maddening experience to knit. There were errors in the pattern, and if I had knitted the collar as written, it would’ve dwarfed the baby. Fortunately, google led me to bloggers who had kindly described how to properly knit the freakish shawl collar. It turned out mostly ok, but I ended up with a slightly lopsided v-neck and bulge in the front. Fortunately, the Meilenweit Fun & Stripes yarn I used mostly hid the bulge. 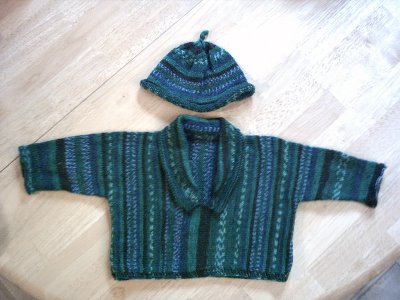 And of course, with Elaina in the sweater, it’s pretty darn cute. But not quite cute enough for me to forgive the pattern.

So I tried this cardigan. The pattern makes a lot of assumptions, and if you’re a newer knitter than I am, you might get a little frustrated. If I remember correctly, the hat pattern makes a freakishly large hat (I improvised), and the booties pictured with the cardigan are not included in the pattern. But it sure did look cute on Alex.

Alas, the Knitpick stripey baby sweater pattern isn’t perfect, either. I’m thinking it might be a little short, although I will withhold judgment until after I get the collar in. Jeanne pointed out that there was really no reason to bother with set-in sleeves for a baby (that Jeanne, always thinking), so I skipped the armhole shaping and am just picking up stitches for the sleeves. I may have miscalculated where to distribute those leftover armhole stitches on the body of the sweater, but I won’t know for sure until I have more of it done.

I’ll probably try Lucy Neatby’s sock-yarn baby sweater next. While I’m tempted by its knit-in-the-round option (no seams! fewer ends!), I suspect that knitting in the round might make the stripes too narrow for best effect. I also know that “Devan” (Knitty Spring 2004) is made from sock yarn, but for some reason that pattern just hasn’t grabbed me – possibly because it seems to take more yarn than the other patterns do. But if the Lucy Neatby pattern doesn’t work out for me, Devan here I come!

The Cat Chaotic was not much interested in babies or baby sweaters, instead choosing to stare zen-like out the fogged over window while I took a picture of the Knitpicks stripey sweater.

Added 12/13/05: Eileen just posted to the TCSnB (Twin Cities SnB) list about success with yet another sock yarn baby sweater pattern (#04042 on this page). Hers looks very cute!

After yesterday’s babble-on, I thought I would take a few pictures of what I’m working on these days. As usual, when Chaos is involved, things didn’t go quite as planned. Please forgive the blurriness of some of the pictures – things were happening pretty quickly!

The sweater that I’m knitting for a friend’s baby. It’s the basic pullover (one-year size) from Top Down for Toddlers, knitted out of tan and royal blue Cotton Fleece. I’m a big fan of no-sew knitting.

“Cool, a sweater on the table!”

“Where did the sweater go?!”

Thanksgiving was interesting this year. My dad and stepmom are in the UK (staying in the castle used for the Harry Potter castle exteriors – how cool is that?) this semester, so there was plenty of advance warning that it wouldn’t be the regular Thanksgiving at their house. Now that my brother Matt is married and part of an extremely large family of friendly, happy, and slightly tipsy inlaws, I simply invited myself along.

There was precedence for this, as two years ago my stepmom went to Jamaica for Thanksgiving with one of her daughters and my dad stayed behind, convinced that he would be unable to get any suitable food (bland, as in no vegetables, spices, or parsley). So he and I joined this extravaganza then. (I should take this moment to point out that you would’ve been fine, Dad – true, they were in Jamaica, but they were staying in some hotel that was part of an American chain – there would’ve been plenty of Dad-appropriate food. Probably more than during your recent visit to Morocco… but I digress.)

Today there were probably 40 people wandering around the inlaws’ house. When you consider that my nonwork time is primarily spent hanging out with Chaos, such a crowd was pretty mindboggling for me. But I persevered (with only minimal nervous eye rolling), and there turned out to be another knitter in the crowd – yay! So we talked knitting a bit. And I realized that I’ve now been knitting for slightly over five years.

Anyway, after much food was consumed (there were 38 pounds of turkey to start with, but not a heckuva lot left but bones in the end – and I can assure you that I didn’t eat anywhere close to a pound of turkey), a group of us settled in the living room. Many fell asleep, but I pulled out my sock project (which is always in my backpack of a purse, waiting for such interludes) and got the heel turned while listening to the occasionally cacophonic chatter. It was a pleasant afternoon, although I was cursing myself for not bringing along the baby sweater for my coworker whose baby is due very, very soon.

As you might be able to tell, I was having a bit of trouble trying to photograph my sock, and gave up trying to get a good picture in the interest of saving my Addis. I’m using the lace pattern from Falling Leaves (Fall 05 issue of Knitty) in a pleasantly autumnal shade of Koigu (which might be color P615 according to my KnitAble record, but it sure doesn’t look like the pictures of P615 I found through Google).