Congrats to Linda C, who won her choice from one of Devon Rhodes’s recent ebook releases!

Many thanks to Kim Dare for donating an ebook copy of her forthcoming kinky paranormal m/m romance, Cameron’s Pride (Thrown to the Lions #4), for a lucky commenter to win! Cameron’s Pride will be released by Resplendence Publishing on December 8. 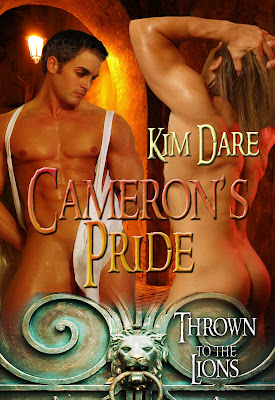 Franklin knows the way the game is played. It’s the man with the money who calls the shots, and Franklin has plenty of money. When he sees a beautiful lion shifter called Caramel dancing on the stage at his favourite club, he doesn’t hesitate to reach for his wallet. And, when Caramel disappears before he can even open negotiations, he’s quick to pay a fortune in order to be thrown to the only pride of werelions in the area.

Cameron’s been living without a pride for years, doing whatever it takes to survive. Dancing in clubs, and doing whatever the guys who throw money at him want him to do in the alleyways behind those clubs, hasn’t given him the best opinion of human men. All he knows for sure is that the rich ones are the worst.

The pride are determined to track down the lone lion that’s living in their territory and bring him safely under their care, but is it too late for Cameron to find a sense of pride – and if he does, will he be too proud to let a wealthy man like Franklin into his life?

“The big kitty makes an ok pillow, even if he is a crabbypants.” -Mayhem