Congrats to Pia, who won Cutting Out (Cutting Cords #4) by Mickie B Ashling!Â Cutting Out is being released today by Dreamspinner Press.

Many thanks to Katherine Halle for donating an ebook copy of here recently released paranormal m/m romance, Cast the First Stone, for a lucky commenter to win! 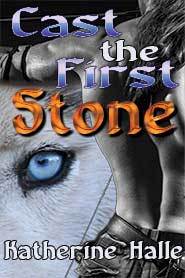 Julian Hart is a werewolf hunter. The murder of his parents at the claws of a pair of rogue werewolves left him as guardian to his younger sister, Zoe. Grief and rage drove him to become a hunter and prevent other families from suffering the same fate. His latest hunt leads him right into Alpha Stone’s territory, where his sister was turned against her will.

Werewolf protocol demands that he ask for permission before entering Stone’s territory and continuing his hunt.Â That leaves Julian with an unwanted entourage and fighting an attraction to a man he shouldn’t crave.

When the smoke clears, what Julian finds at the end of the trail will forever change his life and the lives of everyone he holds dear.

Katherine Halle is known as the “Queen of Happy Endings.” She firmly believes that no matter what the obstacles, what the struggles, or how much angst is involved in the journey, that the ending should always be a happy one.

Katherine’s love of the written word started at a very early age with repeated demands of “read to me” to any who would listen. It was only natural that writing would follow. As a child, she could often be found daydreaming, thinking up fanciful stories and writing them down. Now she does it on a laptop. Much faster.

Katherine’s favorite animal is her dog. She likes books, movies, and quirky television shows, such as Buffy the Vampire Slayer and Hart of Dixie. She loves cooking and watching cooking shows. She has lived in both Europe and the United States and loved both. When she’s not writing or plotting, Katherine enjoys spending her time listening to music, reading books written by other people, and being with her family. You can learn more about Katherine at her blog, Twitter, or Goodreads.