Many thanks to Stephani Hecht for donating a signed paperback copy of The Lost Shifters (Books 1-3) for a lucky commenter to win! Along with the signed paperback, Stephani’s donated a few other fun things for the winner: post-its, a pen, a magnet, and a button! 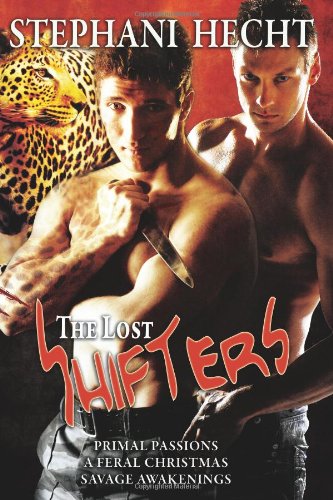 Primal Passions: Jacyn’s whole world is shattered when he’s attacked by Ravens then rescued by a stranger named, Logan. Things turn stranger when Jacyn finds out he’s really a feline shifter. As Jacyn and Logan run for their lives, they find themselves growing closer to each other. Will Jacyn be able to let go of his doubts long enough to trust in Logan?

A Feral Christmas: Brent has never forgotten his lost siblings and vows to bring them home. Then he discovers that one man holds the key to their location, a Hawk shifter named Daniel. Even as the men fight new and old enemies, their feelings of love grow. Will they be able to overcome a lifetime’s worth of hatred and prejudice to be together?

Savage Awakenings: An outcast among his own kind, Rat always lived life by his own rules. That changes in one instant when he receives a call for help from, Keegan, a lost shifter. As they get closer, Rat finds he’s powerless to fight his growing attraction to Keegan. Will Rat be able to let go of his past to embrace a future?

Stephani Hecht is a happily married mother of two. Born and raised in Michigan, she loves all things about the state, from the frigid winters to the Detroit Red Wings hockey team. Go Wings! You can usually find her snuggled up to her laptop, creating her next book or gorging on caffeine at her favorite coffee shop.

When sheâ€™s not running around like crazy, trying to get her kids to their various activities, sheâ€™s working on numerous projects.

You can visit Stephani at her blog or her website.

“Ok, I’ll humor you, Mom, but I don’t understand how a glamour shot is any different from the other photos you take of me. I’m always glamorous!” -Mayhem