Since I never heard back from the original winner, congrats to Devon Rhodes, who won High Flow (EMS Heat, Book 7) by Stephani Hecht! High Flow was released by eXtasy Books this week. 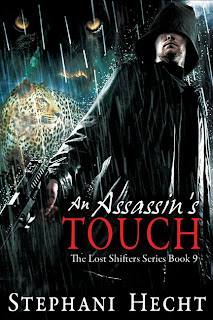 Get this straight, you can use a Leopard in a mission, you can send him out to kill for you. Hell, you can even fuck one. The one thing you can, never, never do is trust one. Leopards by nature are cold, emotionless and psychotic. They were made with one purpose and that was to destroy others. So whatever you do, donâ€™t turn your back on one and you sure as hell donâ€™t fall in love with one of the batshit, crazy loons.– Carson of the Mitchell Feline Coalition.

Nobody realizes better than Shane that he has no real future. As a Leopard, heâ€™s destined to live alone and be reviled by his fellow feline shifters. Instead of letting that hurt him, Shane just throws himself into his work as the coalitionâ€™s top assassin. A job that his breeding makes him perfect for. He tells himself that he doesnâ€™t need anyone else-that heâ€™s fine living a solitary life. Then one, brief encounter with a bratty, Panther shifter named, Trevor, changed everything. Now all Shane can think about is the Panther and how to get the man back in his bed. The only problem is Trevor hasnâ€™t given Shane so much as a second glance since their one time together. A situation that frustrates and intrigues Shane even more.

Trevor has always enjoyed playing the field. With so many sexy temptations at his disposal he doesnâ€™t see why he should have to settle for the same warm body in his bed night after night. So, while the sex with Shane had been great, Trevor is determined to put the encounter behind him. A task thatâ€™s not as easy as it would seem. Not when every night he continues to dream of the Leopard, or how whenever theyâ€™re in the same room, Trevor canâ€™t stop himself from wanting to reach out and caress the Leopard. But, Trevor knows that there can never be anything between them so he resolves to put his desires behind him.

Then Shane needs help on one of his assignments and he turns to Trevor. The mission proves more dangerous than either one of them realizes and they soon find themselves fighting for their lives. Will they be able to learn to trust each other in time to save themselves, or will their past doubts destroy them?

Stephani Hecht is a happily married mother of two. Born and raised in Michigan, she loves all things about the state, from the frigid winters to the Detroit Red Wings hockey team. Go Wings! You can usually find her snuggled up to her laptop, creating her next book or gorging on caffeine at her favorite coffee shop.

When sheâ€™s not running around like crazy, trying to get her kids to their various activities, sheâ€™s working on numerous projects.

You can visit Stephani at her blog or her website.

“Neener, neener, Mom! I see that handsome black kitty up there that you’re trying to hide from me!” -Mayhem