Many thanks to Blaine D Arden for donating two ebook copies of her freshly re-released, award-winning m/m fantasy romance, Oren’s Right (2nd ed), for two lucky commenters to win! If you previously purchased the first edition, Blaine has a faq explaining how to get the second edition without additional cost. 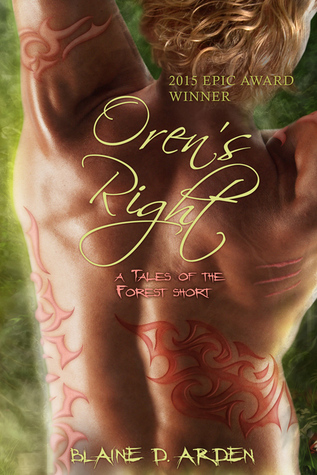 Forester Veld loses a piece of himself to mute baker Oren when they first meet, but Oren is vowed to Haram. When Haram is killed, Veld denies his heart to respect the mourning period. It’s the right thing to do.

During Haram’s funeral, Oren proudly bares the brands that show the nature of their love; Haram owned him, heart and body. The elves pity Oren and think he’s broken.

Veld has no intention of dishonouring Haram’s memory, but his death may not have been an accident. Only a forester can learn what the trees have seen. However, Oren’s independence is threatened, and if Veld does not offer what Oren needs, Oren may never be his to claim.
___________________________
Tales of the Forest stories can be read in any order

NOTE: This is the second revised/re-edited edition of Oren’s Right, and includes an extra bonus scene. It was previously published by Storm Moon Press.