Many thanks to Valentina Heart for donating an ebook copy of her recently re-released m/m fantasy romance, Owner of My Heart (Mending the Rift #2) (2nd ed), for a lucky commenter to win! (There will be one more contest later this month for the final book in the trilogy.) 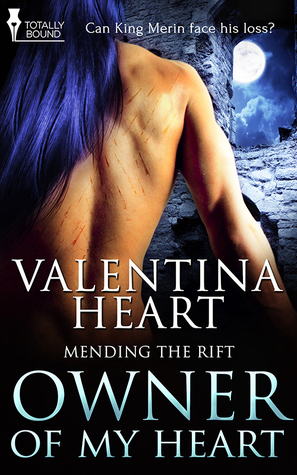 Can King Merin face his loss, save his husband and protect his kingdom, or have his enemies finally found a way to defeat him?

When an enemy Merin thought defeated takes his unborn children away from him, he’s at the end of his rope and still has to find enough strength to save his husband Rin from the clutches of sorrow. Unable to find peace, Merin and Rin must deal with an aggressor who plots to ruin any chance of happiness that they might have. To make things worse, the newly united countries must prepare for a new trial – a war against a vicious invading army that’s using the weakened state of the kingdom for its benefit.

How will Merin and Rin recover from their terrible loss and give their people heirs? Will the newly united countries work together as one to save Merin’s kingdom – and his family – from the ongoing dangerous challenges? Can love truly push through all obstacles, or will their enemies discover their weaknesses and finally achieve victory?

Reader Advisory: This book contains a male pregnancy. It is best read in sequence as part of a series.