Many thanks to Becky Black for donating an ebook copy of her freshly released m/m science fiction romance, Tempting the Stars (Red Dragon #3), for a lucky commenter to win! 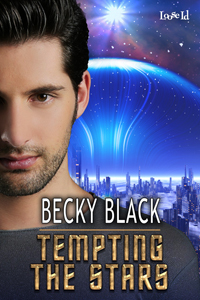 Marriage should be a happy ending, but for Alyn and Jarvez it’s only the start of a new set of problems as grief and guilt stir deeply buried desires in Jarvez. Will wedded bliss prove to be a myth?

The Red Dragon returns to Earth carrying the newly-married Captain Alyn Evans and Company Rep Jarvez Kashari. After promising to leave the Dragon, Jarvez expects confrontation when the grandfather he’s spent all his life trying to please learns he lied. But the showdown never happens – he arrives home to the news his grandfather is dead. While dealing with the shock and grief, the revelation of a terrible old secret changes Jarvez’s perceptions of his family and the company.

Coming to terms with what he learned at home, haunted by guilt for his unwitting part in it, Jarvez finds dark sexual urges surfacing. He longs for punishment, domination, and pain – longings Alyn finds hard to satisfy. The Dragon leaves Earth with a new mission and Jarvez has new ambitions. He wants to raise enough money to leave the company behind, buy a ship with Alyn and become independent traders. When a consignment of diamonds is stolen aboard the Dragon, they are not allowed to go on until the case is solved. With only a few days left to buy the ship he wants and start the new life he dreams of, Jarvez must find those diamonds.