Many thanks to Lou Harper for donating an ebook copy of her recently released m/m romantic suspense/mystery, Secrets and Charms (Secrets #2), for a lucky commenter to win! 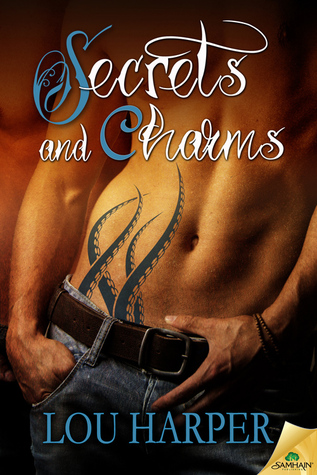 One hot ginger. One cool blond. The result is anything but lukewarm.

Out and proud from a tender age, Olly Blackwood is content with life in LA, working at a Hollywood gourmet grocery. There’s only one thing missing: romance. He’s had his fill of casual hook-ups. He wants a man for keeps, and he wants sparks.

He certainly gets them when he meets Rich Willson, who has the stormy temper to go with his fiery hair. But is he keeper material? He might be if only he’d come out of the closet.

After losing his disapproving father, his job, his girlfriend, and pretty much all his money, Rich packed up his secrets and moved to his actress sister’s house to regroup and help her renovate. He doesn’t like the curmudgeon he’s become, but something about the perpetually cheerful Olly rubs him in a way that should be wrong, yet feels pretty damned right.

Over paint buckets and sanding tools, Rich finds Olly getting deeper under his skin. But when an altercation with a paparazzo comes back to haunt him, he finds that sordid Hollywood secrets can be murder – maybe his own.