Many thanks to Kim Dare for donating an ebook copy of her recently released kinky m/m romance, Worth a Shot (FIT Guys #2), for a lucky commenter to win! 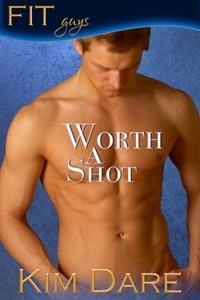 Everyone knows that Tony Landon’s dated dozens of different men and women since he joined the athletics department at the Falconer Institute of Training. Everyone who’s ever gossiped with one of his exes knows that he’s kinky, too.

Donovan’s reputation at the institute is different. The only reason people are pretty sure he’s gay is because he drinks at the same pub as most of the gay and bi Falconer guys, and he’s never actually said he’s straight when he’s brushed them all off.

Tony’s been flirting with Donovan ever since Donovan joined the institute’s archery programme. Even though a whole year has passed and Donovan’s never given him the slightest encouragement, Tony can’t quite convince himself to give up hope.

Donovan has his reasons for not flirting back whenever Tony hits on him – right up until a snippet of overheard gossip lets him in on an interesting fact that just might change everything.

The odds are stacked against two very different men ever finding happiness together, but as far as Tony and Donovan are concerned, it’s still worth a shot.

Author note: While this story can be read as a standalone title, some elements might make more sense if you’ve already read Worth Waiting For (FIT Guys #1).

“Did you hear that, big kitty?!” -Mayhem

“Is that a dust bunny or prey under the table? Hmm…” -Chaos