Many thanks to Becky Black for donating an ebook copy of her freshly released m/m science fiction romance, Too Good a Man (Red Dragon #2), for a lucky commenter to win! 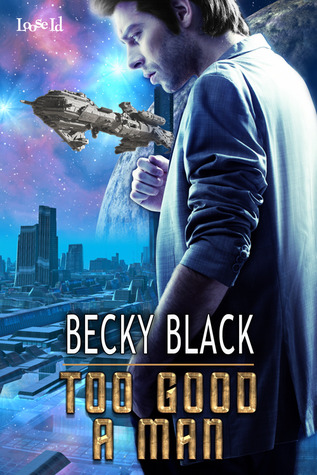 After months of sneaking around, Captain Alyn Evans and Jarvez Kashari have gone public as a couple. Alyn wants to move in together, but Jarvez isn’t ready. As the Red Dragon’s trading mission begins, Jarvez worries that Alyn’ principles will clash with the Companyâ€™’ sometimes ethically dubious methods. The Company rep aboard ship, he fears he’ll be the one to feel the sharp edge of Alyn’s disapproval and could even lose him.

Alyn’s unbending sense of right and wrong leads him to give asylum to an enslaved man, Sumi, bringing threats of retribution from Sumi’s owner. This leads to tension between Alyn and Jarvez when Alyn makes Sumi his personal steward and Jarvez feels he can no longer get a moment alone with his lover.

Sumi’s owner follows up on his threats and Alyn is brought before a court in a politically charged trial, whose outcome already seems fixed. Kept apart from Alyn, terrified he’ll see him go to prison, Jarvez doesn’t think the situation can get any worse. Until Alyn’s ex shows up. In the end he’ll be driven to beg for help from the one person who’d like to see Alyn out of Jarvez’s life forever.