Many thanks to JL Merrow for donating an ebook copy of her forthcoming m/m romance, Out! (The Shamwell Tales #3), for a lucky commenter to win!Â Out! will be released by Samhain Publishing on January 19. 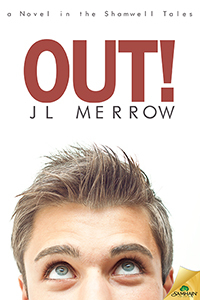 When the costs are added up, will love land in the black?

Mark Nugent has spent his life in the closet at least, the small part of it he hasn’t spent in the office. Divorced when he could no longer deny his sexuality, he’s sworn off his workaholic ways and moved to Shamwell with his headstrong teen daughter to give her a stable home environment.

His resolve to put his love life on hold is severely tested when he joins a local organization and meets a lively yet intense young man who tempts him closer to the closet threshold.

Patrick Owen is an out-and-proud charity worker with strong principles – and a newly discovered weakness for an older man. One snag: Mark is adamant heâ€™s not coming out to his daughter, and Patrick will be damned if he’s going to start a relationship with a lie.

Between Markâ€™s old-fashioned attitudes and a camp, flirtatious ex-colleague who wants Mark for himself, Patrick wonders if they’ll ever be on the same romantic page. And when Mark’s former career as a tax advisor clashes with Patrick’s social conscience, it could be the one stumbling block they can’t get past.

40 thoughts on “Ebook giveaway: Out! (The Shamwell Tales #3) by JL Merrow [CONTEST CLOSED]”