Many thanks to Becky Black for donating an ebook copy of her freshly released m/m science fiction romance, The Champion’s Secret (Red Dragon #4), for a lucky commenter to win! 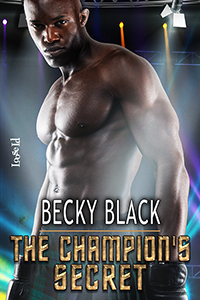 Lawyer Will Garrett took a job with the Outer Spiral Trading Company for one reason only – to keep his ex out of jail. Now his ex is free, but with someone else. This leaves Will seeing out the final months of his contract on assignment as the legal counsel for a sports team of Modern Gladiators on a Company sponsored tour.

Jimmy Campbell, mighty Highland warrior, is the champion and captain of Team Spartacus. But really he’s James De Villiers, half-Scottish, half-South-African, ex-soldier. He’s only in this for the money. One more season then he’s gone. He’s already older than most of the team, with a nagging shoulder injury.

Will and James get together thinking only of killing time in bed during the trips between tour stops. But as they grow closer and Will makes friends with the team, trouble starts with team manager Lenny Sheridan. Lenny doesn’t want anyone to know James is gay. A hostage crisis focuses all the media in the sector on the team and forces James to decide if keeping his secret and his career is more important to him than acknowledging his relationship with Will, whatever that costs him.