Many thanks to Eden Winters for donating an ebook copy of her forthcoming m/m romance, A Matter of When, for a lucky commenter to win!Â A Matter of When will be released September 15 by Dreamspinner Press. 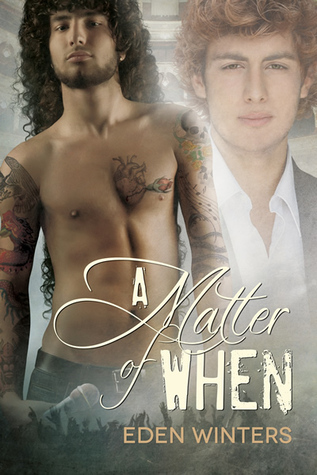 Wealth. Fame. Gold record. Hookers and cocaine. Front man Henri Lafontaine has it all…including a control freak manager, band members who smile as they sharpen blades for his back, and last but damn well not least, a fan out to steal his heart. Literally. Trying to write hit songs and plan a comeback in the midst of the hi-fi white noise of LA feels more like watching his world implode, until he’s offered a month in the Colorado Rockies for vocal coaching.

Sebastian Unger’s rich, classically trained tenor inspires wicked thoughts. More than a pretty choir boy, he cracks the whip without hesitation to drive tattooed bad-boy Henri to give his all to his music. Working, fighting, and finally establishing a fragile peace, they find inspiration and perhaps more in each other. But the clock is ticking. Time will pull Henri back to the grit and gold of LA’s mean streets and fame machine, while Sebastian must return to the opera circuit, where a mysterious man known as “the patron” holds far too much sway. Only the trust they’ve built on a handful of notes bridges their two worlds…and shields them from malice.

I managed to forget to change the email password for the blog, so for those who commented on yesterday’s post before 8 am CDT, your comments showed up just fine on the blog and for the contest, but I never received emails for the comments. Not ignoring you intentionally! 🙂

51 thoughts on “Ebook giveaway: A Matter of When by Eden Winters [CONTEST CLOSED]”