Many thanks to PD Singer for donating an ebook copy of her forthcoming m/m romance, Spokes, for a lucky commenter to win! Spokes will be released on November 1 by Rocky Ridge Books. 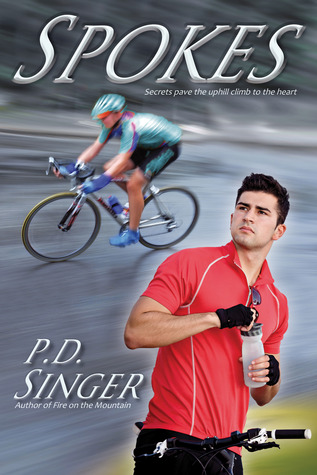 Pro cyclist Luca Biondi lives for the race. For the star of Team Antano-Clark, victory lies within his grasp – if he can outdistance 200 other hopefuls, avoid suspicion from race officials, and keep his lieutenant more friend than foe. Luca also has secrets, and eyes for amateur cyclist and journalist Christopher Nye.

Christopher understands Luca’s need to keep their relationship under wraps, but chafes at hiding in the shadows of his lover’s career. He’s ready to cheer Luca’s victories, but he knows too well how triumph can turn to tears. While Christopher’s heart sees Luca the man, his inner journalist – and his editor – sees the cycling worldâ€™s biggest scoop.

From the jagged curves of the Colorado Rockies to the viciously steep Belgian hills, Luca can ride out any bumps – except rumors.

A few words in the wrong ear could crash everything. With miles between them, hints of scandal, and Luca’s fierce need to guard his reputation, a journalist might have to let go of the biggest story of his career or risk forcing his lover to abandon the race. Christopher and Luca face a path more treacherous than any road to the summit in the Italian Alps.

“Hmm. Don’t you think that colorway is a little… busy?” -Chaos