Many thanks to Kim Dare for donating an ebook copy of her freshly released kinky paranormal m/m romance, Axel’s Pup (Werewolves & Dragons #1), for a lucky commenter to win! (Kim is releasingÂ Axel’s Pup today. If you’ve already purchased the book and you win the contest, you will get to select a future book from Kim instead!) 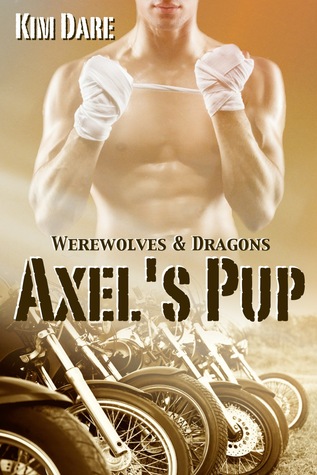 As the landlord of The Dragon’s Lair and leader of The Black Dragons Motorcycle Club, Axel Carmichael has seen it all and done it all. He’s a respected and experienced dom. Nothing shocks him any more, and nobody catches him off guard.

When Bayden rides up to The Dragon’s Lair on a bike worth more than most men earn in a year, and immediately demonstrates that he has far more attitude than sense, it’s easy for Axel to write him off as a silly little rich boy who’s about to get himself killed.

But there’s more to Bayden than meets the eye. He’s no silly little boy, rich or otherwise, and werewolves aren’t easy to kill.

Yes, I agree, sleeping with his eyes partly open is really creepy!