Many thanks to Kim Dare for donating an ebook copy of her freshly released kinky paranormal m/m romance, Seeking Something (Sun, Sea & Submission #6), for a lucky commenter to win! 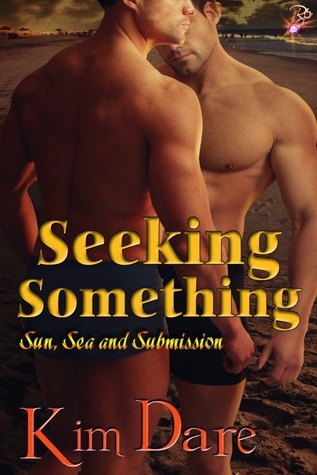 Billy Lewis thinks he might be gay. He also thinks he might be a submissive. The only thing he’s really sure of is that, at twenty-three years old, it’s time he found out what he’s really into. A hotel full of kinky gay men seems like the perfect place to find some answers. A little bit of alcoholic courage, and he’s ready to dive right into the deep end.

Gareth Vaughn isn’t the kind of man to second guess who he is or what he wants. He’s gay. He’s a dom. He’s at the hotel looking for a weekend of no strings fun with a willing sub. But he’s not the kind of man who’ll leave a boy who’s drunk and out of his depth to sink or swim among strangers.

Gareth and Billy couldn’t be more different, but they’re both at the hotel seeking something and they’re both about to get a whole lot more than they expected.

While Kimâ€™s stories range over male/male, male/female and all kinds of menage relationships and have included vampires, time travelers, shape-shifters and fairytale re-tellings, they all have three things in common â€“ kink, love and a happy ending.