Many thanks to Piper Vaughn for donating an ebook copy of her forthcoming paranormal m/m romance, Prickly Business (Portland Pack Chronicles #1), for a lucky commenter to win!Â Prickly Business will be released by Dreamspinner Press on July 27. 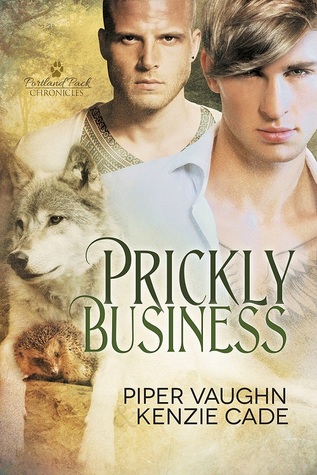 Some people might call Avery Babineaux a prick. He’s a hedgehog shifter from an old-money Louisiana family with a penchant for expensive shoes and a reputation for being a judgmental snob. His attitude is why he and his fated mate are estranged. Not that Avery cares. He doesn’t want to be mated to some blue-collar werewolf anyway. Or so he keeps telling himself.

No werewolf likes to be looked down upon, least of all Dylan Green. He doesn’t need a mate, especially not some snotty hedgehog who sneers at his custom motorcycle shop and calls him a grease monkey. But when Avery gets into trouble with a shady loan shark, Dylan can’t stand by and let him be hurt – whether he wants the brat or not.

Yet once Dylan steps into Averyâ€™s world, he realizes there’s more to Avery than his prickly exterior, and that unexpected vulnerability calls to Dylan’s protective instincts. The sassy little hedgehog needs a keeper, and despite their horrible first impressions, Dylan starts to believe he might be the wolf for the job.

Piper Vaughn wrote her first love story at eleven and never looked back. Since then, sheâ€™s known that writing in some form was exactly what she wanted to do. A reader at the core, Piper loves nothing more than getting lost in a great book â€“ fantasy, young adult, romance, she loves them all (and has a thousand book library to prove it!). She grew up in Chicago, in an ethnically diverse neighborhood, and loves to put faces and characters of every ethnicity in her stories, so her fictional worlds are as colorful as the real one. Above all, she believes that everyone needs a little true love in their lifeâ€¦even if itâ€™s only in a book. You can find out more about Piper at her website, Facebook, Twitter, and Goodreads.