Many thanks to Josephine Myles for donating an ebook copy of her freshly released m/m holiday romance, Merry Gentlemen, for a lucky commenter to win! 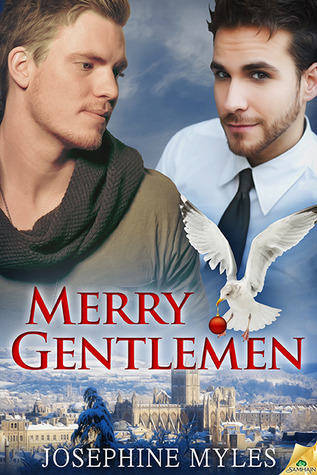 ‘Tis the season of goodwill to all men…even the one who dumped you.

Riley MacDermott’s ambitions are simple. Managing the annual Bath Christmas Market – which involves long hours in the cold and a whole lot of hassle – will secure the promotion he needs to afford to move out of his noisy, top-floor flat. Where not even his balcony is safe from an aggressive herring gull.

The last stallholder he expects to see is his ex. Riley never recovered from their break up, and five years on the old chemistry still sparkles. So does their habitual head butting.

Stan never wanted to leave the love of his life, but the pull of the woods was too strong – and Riley was firmly planted in the city. Reconnecting is painful, but Stan still jumps at the chance to stay with his old flame during the Market. And damn the consequences.

As the weeks pass, the two grow closer than ever. But despite scorching sex and cozy intimacy, they both know they face a cold and lonely future. Unless one of them can compromise.

Warning: Contains sex in a shed, a seagull with a grudge, glamping, awful Secret Santa underwear, misuse of an Abba song, and as many wood-related puns as the author thought she could get away with.

Eccentric Englishwoman, absent-minded mother, proud bisexual, shameless tea-addict, serial textile craft hobbyist, iconoclastic logophile and writer of homoerotic romance â€“ Josephine Myles is all these things at once. She has held down more different jobs than any sane person ever should, and is fundamentally rebellious, preferring the overgrown yet enticing path rather than the wide and obvious one.

She lives in rural Somerset, in the West Country of England, with her husband and four year old daughter. Currently self-employed, she gave up a career teaching English Literature to look after her daughter, who has Downâ€™s Syndrome. When she isnâ€™t working, writing or spending time with friends and family, she bakes cakes and attempts to finish off some of the textile projects she has started, with varying degrees of success. She can occasionally be spotted wearing her creations, as no one else will.