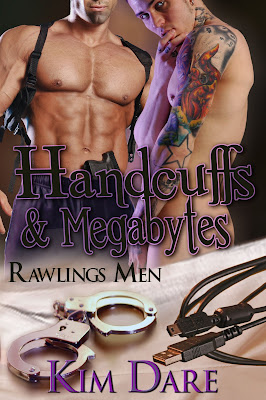 Mike Shane’s an old fashioned kind of cop. To his mind, police work should be all about pounding the pavement, interrogating suspects and following leads. It should not involve hours spent sitting at a desk staring at a computer screen. When he’s seconded to a computer crimes task force, he’s dreading spending all his time surrounded by computers and computer geeks.

Carl Rawlings is no geek. With a body full of tattoos and piercings, along with a new found interest in anything and everything kinky, he’s not your average cop – or your average computer expert either. Immediately drawn to the other man’s old school style of dominance, he quickly decides that teaching Mike all about the new program he’s developed won’t be so bad after all, but who knows what Mike may teach him in return?

“Well, these are sort of stripey, but look at how speckley they are. I’m not sold on that.” -Mayhem